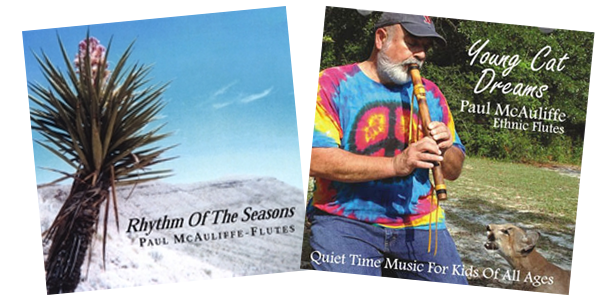 Paul McAuliffe is a musician with a passion for wooden and bamboo flutes. His collection includes models from Japan, India, Nigeria, South America and many other locales. He even carves his own.

Paul writes his own music, too. His albums Young Cat Dreams and Rhythm of the Seasons, are unique and soothing.

While Paul has always had music in his heart and had a local audience, it wasn’t until he joined the ASPIE family that he was able to share his music more widely. ASPIE paid for some of his recordings to be pressed onto the CDs that he now offers.

We Can Help More Artists

ASPIE has a waiting list of artists like Paul who are eager to show their work. But it requires resources to take an artist live. Special ABLE savings accounts, art supplies, inventory controls and many other services are necessary before they can show their work and receive donations.

That’s why we created the ASPIE Ambassador Program to help get these artists live in the ASPIE gallery. ASPIE Ambassadors pay $300 (which is tax deductible) and the donation is used to get artists showing their work on the site.

When we launched our program in February, four new ambassadors came forward in the first two weeks. Thanks to Diane Michael, Joe Losquadro, Judy Losquadro and Janice Anderson, we can now take four new artists onboard. You can be the next ASPIE Ambassador!

It is hard to overstate the impact on artists when they are able to share their work. Many adults with disabilities have difficulty in a traditional work environment. The donations that ASPIE artists receive provide sustainable supplemental income that can help with all kinds of expenses.

More important is the sense of pride. ASPIE artists work hard on their pieces, whether they are paintings, carvings, photos, music or crafts, and it brings them great joy to share their work with people who enjoy it.

In Paul’s case, for example, he has much to share. Paul has lived in the Green Mountains of Vermont, on the Maine coast, in the Chihuahuan Desert of the West Texas border, and in the Big Cypress Swamp in South Florida. He loves the wild places and that love is reflected in his music.

His first album, Rhythm of the Seasons, contains more than an hour of music and Paul plays every instrument. Two solo flute songs are played on a replica of a 1,100-year-old Anasazi flute. His second album, Young Cat Dreams, is also an hour and features 11 different wooden and bamboo flutes, three of which Paul created himself. His peaceful, ethnic flute music is perfect for meditation or lullabies. A new upbeat CD will be available very soon, featuring a variety of instruments along with the flutes.

Paul and his fellow ASPIE artists have much to give, but they need our help. Together, we can help artists like Paul show their work and become more self sufficient. Become an ASPIE Ambassador!