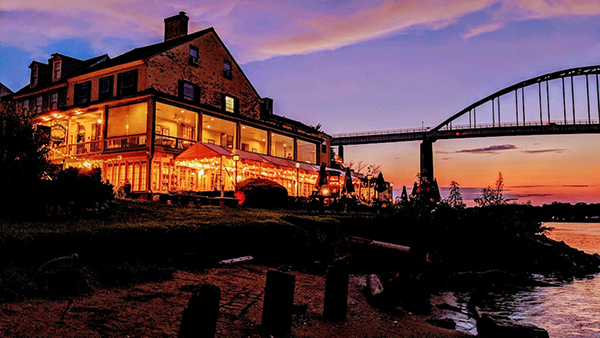 JP Henry is an award-winning photographer who, after spending all spring and most of the summer quarantined, was going stir crazy. He just wanted to get out of the house…

JP likes to post a “feel good” picture-of-the-day on his Facebook page to “help people smile” during these difficult times. One of his pictures is of a restaurant, and the manager of the restaurant saw the photo and reached out to ask how much he would charge for the photo rights. JP replied that he wanted, “A cheeseburger on the deck, to hear some live music, his name under the photo, and $10 or $12.”

If you are wondering about this story, here you go. JP Henry is a photographer. His camera belongs to his mom, Jane Ward, and the camera is her cellphone. JP has been taking pictures with his mom’s cellphone for about two years. JP and Jane live in Earleville, MD, and recently, JP began printing his pictures on canvas. Local businesses have allowed JP to display and sell his pictures in their shops, and he and his pictures have garnered attention and praise. Notably, JP believes in giving back to the community, so he donates 10% of all his sales to charity.

This spring, JP entered a “juried” photography contest at the Cecil County Arts Council in Elkton, Maryland that attracted both professional and amateur artists alike. A “juried contest” meant that a panel of judges would decide if his work was good enough to be in the competition. Not only was his work accepted, but he went on to win “Best in Show!” As a winner, JP represented Cecil County at an art display in the Maryland State Capital in Annapolis. He currently has seven of his photographs on display, including his winning photo, “Exit the Demons.” All taken with his mom’s cellphone! This is a great “feel good” story by itself, however, this is not all there is to this tale. The real story is JP himself. You see, JP is autistic.

Let’s go back to the restaurant story. One of the “feel good” photos that JP displayed on Facebook was of the Bayard House Restaurant. The restaurant manager, Jennifer Marin, saw the picture on Facebook, where she also learned that JP is autistic. She was so moved and charmed, that she invited JP to the restaurant for his upcoming birthday to have a cheeseburger on the deck and listen to some live music, but that’s not all. She also invited three different bands to perform, invited JP to display his photographs in the restaurant, and, to match JP’s generosity, she committed to donate 10% of the register receipts from that day to JP’s designated charity! Rec

ently, JP discovered ASPIE – a website to help disabled artists – and he asked Jennifer to contribute the restaurant’s donation to ASPIE to help other artists like himself.

JP is an award-winning photographer, and he has pictures on display in the State Capital, but the real story here is about JP the person. His kind and thoughtful heart combined with his photographic skills make him a role-model for all of us. As an autistic artist, JP, with the loving assistance of his mom, has grown to be a talented and caring young man.

His mom, Jane Ward is a single mother, and advocate for the disabled community. When you get to know Jane, you learn immediately where JP gets his qualities. That afternoon, JP made it to the Bayard House restaurant and enjoyed what amounted to a “cheeseburger in paradise” for himself and all the other disabled artists that benefited from his generosity.