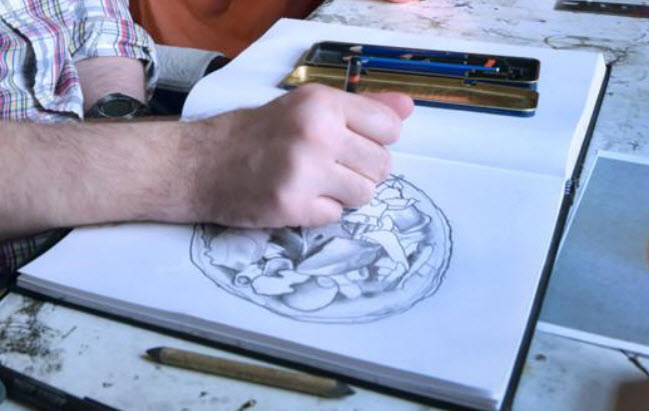 Jonathan is approaching the 20-year anniversary of the car accident that left him in a coma for five months and began a long journey of recovery. Not only did he have to reacquire everyday skills, but he had to relearn how to draw and paint—his calling as an artist.

Annette is approaching the anniversary of her book, The Long Run, which chronicles Jonathan’s recovery and how she and her family were able to cope with the accident, care for Jonathan, adjust their lives and support him in a career that has grown steadily.

“To go from thinking you’re not going to have your son to where we really are partners … I just feel like this is such a gift,” she told LNP. “To have him, still. I feel privileged as a mom.”

Jonathan agrees. “I love her,” he said. “She has always been my number one advocate.”

ASPIE too was featured in the story as a primary outlet for Jonathan’s work. Founder and CEO Jerry Buckwalter explained that gifted artists like Jonathan make ASPIE a great place to find handmade, artistic gifts for all kinds of occasions.

“You’re not selecting their gift out of sympathy,” Buckwalter said. “You’re selecting it because it’s … a talented piece of work.”

Recognition like the Lancaster News Press story is extremely helpful to artists like Jonathan and Annette, who are promoting their work (and to Jeff Whitlock, a father and dad who is living with two artists). Jonathan and Annette will appear at a showing June 7 in Gallery One, a new facility in Lancaster, Pennsylvania, where they make their home.

Of course, work by both Jonathan and Annette appear everyday in the ASPIE gallery, where his paintings and her book are available, providing valuable supplemental income and a growing community of supporters.

What can you do to help? Share the LNP story with your friends and family and let them know about this incredible tale. And take a look at the ASPIE gallery, where news gifts are always being added.